A year ago (almost to the day), we put together the piece that follows under the title: So, Saddam Hussein Swung; So What?

We believe it's time we published it again. 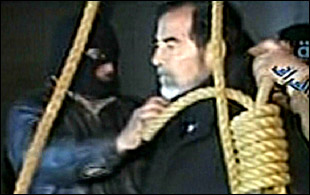 So, we see that Saddam Hussein swung.

So a single drop in the ocean (despot-wise), has (admittedly, deservedly), died as he had lived - via violence.

But we still say, so what?

They still live lives of luxury as they feast off the fats of their people's lands, and at their leisure & pleasure sup freely of others' blood, sweat and tears. Including yours and ours.

They still grow richer as we, the overwhelming majority of the masses, grow poorer - and certainly neither simply nor solely in the most easily understood terms of filthy, tangible lucre.

They continue becoming increasingly more powerful and decreasingly less caring - as far as their ordinary fellow countrymen and women are concerned.

They continue organising and ordering the mass killings of innocents.

Also -- the premeditated, serial infliction of torture, pain, maiming, deprivation, persecution, and all manner of similar suffering for which they are responsible -- it all remains rampant, unabated, largely unchallenged and almost totally unrestrained.

None of the terrible trauma experienced by any who sincerely strive to stand up to them, or even strongly and conscientiously dare to criticize them, has ceased.

Nor have they even lessened. Neither in quantity nor 'quality'. Nor are they likely to.

So, Saddam Hussein has swung.

So bloody well what?

The serially spewed, shameless shit of the same old, same old smoke and sodding mirrors -- that's what. And that's all. And don't let anyone try to tell you anything different.

Invoking inane, hackneyed, blase, lame, repititious, stock utterances such as 'The world's a better place ...', they retain the audacity to attempt to placate any regular man & woman in the street's uncertainties with just such (and similar), transparent tissues of lies.

What a gargantuan barrel of bullshit. What a humungus load of bollocks. What sheer unadulterated, raw codswallop. What contemptible insults to, and reprehensible disdain for, our own common sense and basic intelligence.

When you awoke this morning where you aware of any improvements?

Since, - for those who may not yet have realised it, we want to plainly point out that - the dead have definitely not risen. Not a single, solitary one of them.

No bloodied broken victims have become whole again. Nor are any of them likely to.

Useless, senseless, sickening (yet convenient and/or profitable), wholesale slaughter still holds sway -- and is set to continue to. All under the disingenuous guise of serving the 'national' interest.

Sincere dissent and/or serious discussion is still stifled -- and will continue to be.

Political, religious and racist scores - both national and international - are still settled daily, almost always unmercifully -- and will continue to be. Of that you may be certain. As a matter of fact you can quite categorically quote us on it.

The puke producing political pricks in power still proliferate -- and will continue to.

Needless wars based on patently outrageous lies are still being waged -- and will continue to be.

Moreover, even as we type, fresh carnage elsewhere is currently in the offing.

The great game goes on.

More madness and mayhem is at this precise moment being arranged -- the bulk of it, in the most meticulous, cold blooded, calculated manner imaginable .

So Saddam Hussein has swung.

So we say again, so what?

And we can count on them continuing to -- for as long as we the people remain so appallingly apathetic as to always accept and allow it all.

So Saddam Hussein has swung.

(See what some of the Arab world is saying).

* N.B. One year later we can answer our original question ourselves. A lot more people have been killed murdered, and a lot more big-bucks-blood-money has been made.

One year later we can answer our original question ourselves. A lot more people have been killed murdered, and a lot more big-bucks-blood-money has been made.

And Saddam Hussein (lest the Bush supporters forget was a prop of the US gov't) had nothing to do with it.

And the US and UK went there to give the Iraqi people their "freedom" eh?

God damn every single one of those guity parties involved .. whatever their stripe.

I agree entirely with all that's been said~in your piece and within in these comments.

Seldom have I hoped more for a happy new year~at any rate at least a far 'happier' one than most of us have had for the last few years.

It makes me mad when I hear them drone on about the world being a better place without Saddam.

Iraq is part of the world isn't it? How can anyone seriously say Iraqs are better off than they were under Saddam. Sure, he was a bad man but he wasn't as bad as all the bad men [yanks, especially] crucifying the Iraqi people right now. A public crucifixion that's cruely dragged on from the first day of shock and awe.

Better off? Give me a break.

And there's also this, not unrelated, which will give you a few "Bloody hell!" (s):

It's a bit long, but repays the read.

Finally, make what you will of this:

which is basically a list of all the 'anons' mentioned in your piece. Happy reading!

Thanks for reposting this Richard, it's an excellent piece.

Sorry I've been out of things most of this year,

Happy Christmas and New Year to you, family and your readers.