We see that Tony (the-liar) Blair has finally become a fully paid-up, official member of the fabled Ratzi Pack. 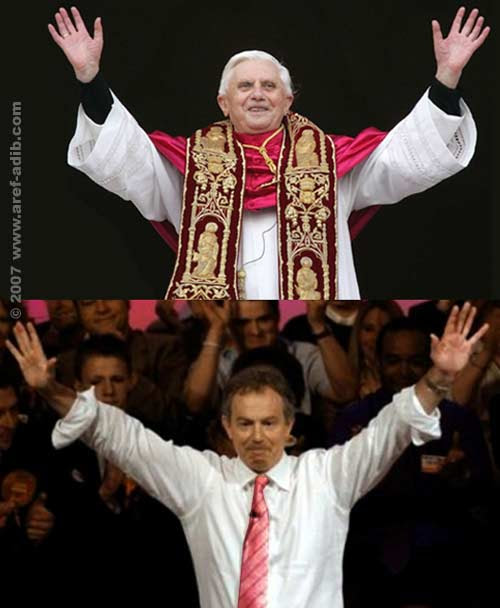 Former PM Tony Blair has converted from the Anglican to the Catholic Church.

His wife [Cherie]and children were already Catholic and there had been speculation he would convert after leaving office.

Cardinal Cormac Murphy O'Conner, who led the service on Friday in which Mr Blair became Catholic, said he was "very glad" to welcome him.

Last year, Mr Blair, who is now a Middle East peace envoy, said he had prayed to God when deciding whether or not to send UK troops into Iraq.

And one of Mr Blair's final official trips while prime minister was a visit to the Vatican in June where he who met Pope Benedict XVI.

Read the rest of the relevant irrelevant religion, report.

(N.B.)
* At the time of pushing blogger's publish button, according to several usually extremely reliable anonymous sources, no changes at all in the status (religious or otherwise), of any of Blair's war dead have been reported.

Huh. I wonder how long it'll be before his beatification?

I see that during the course of the last few hours the liar, Blair has just had more of his lies exposed. Big, important lies.

An inquiry should examine Tony Blair's role in the scrapping of an investigation into a major arms deal, Lib Dem leader Nick Clegg has urged.

The then-PM had said the decision to stop the probe into the BAE deal with Saudi Arabia was taken due to national security, not commercial, concerns.

But in a letter released during a legal case, Mr Blair refers to "concern" over ongoing business negotiations.

The b**tard was a bent as a four pound note. Let the vatican have him. They're welcome to him. What's more, he should feel very at home there where the hierarchy is as self serving as was his [Blair's] government.

Oh dear, I meant to include this link to the latest Blair lies expose mentioned in my previous comment.

Tony's a bit late joining, Richard. Still, he got in before the swansong.

According to St Malachy there's only one more pope to go then......hold on to your hat for Armageddon....or whatever!

"The Prophecy of the Popes attributed to Saint Malachy {Malachy O’Morgair Archbishop of Armagh Ireland} allegedly predicted the Succession of Popes up until modern times. Malachi's Prophecy of the Popes begins with Pope Celestine II who was elected in 1143 and ends with a pope described in the prophecy as "Peter the Roman", whose pontificate will end with the destruction of the city of Rome and the Final Judgment. Since the departure from this World of Pope John Paul II ,there is one more Pope remaining after the current one till the list ends."

I believe it's the Mormons who practice post-mortem baptism. So Blair's war dead are probably Latter Day Saints.

Somebody pass the nails and hammer.

It's strange that his beliefs were put on hold to further his political career, a decision that he freely admitted to, although he couched it in terms that placed the reason firmly on the shoulders of the British people, rather than his own egotistical advancement. Surely, religious belief should come before personal gain? Not that it will bother Ratzinger too much. He's just happy to add another sucker to his steadily dwindling fanbase.

Ooooooooh, I get it, I get it!!!!
See, now he gets to confess all his murdering depraved and lying sins and he gets FORGIVEN. Like being born again, only better.
And he gets on the elevator FIRST, post Rapture, being cacklick and the ONE TRUE CHURCH thingie and Joey The Rat's bestest friend.
Merry Christmas Rick and a great New Year!
XO
WWW

I will never understand people who convert. What difference Catholicism and any other religion will make in one's life ? I understand that faith could be important for some people but I don't understand the rest...Blair is such a weak man. How can we count on leaders like him when these leaders must rely on entities like religion instead of God tout court or even instead of themselves as their own men ? This is silly...And we are so much arrogant as to criticize other people's religions, like Muslims for example...I really don't understand...Balir is the silliest ex-leadeer alive, even silliest than Bush himself.

Anyway, happy Christmas Richard but keep in mind that our Christmas is everybody's christmas, not only the Catholic one...