Blogroll Me! How This Old Brit Sees It ...: Cold Comfort Coming For Millions Of Strapped-for-Cash, Americans ...

We've been suffering a streaming cold this last couple of days, and yep you guessed it, feeling pretty sorry for ourselves.

Maybe we should shut up, stop snivelling and count our blessings, eh? After all, there's always some poor soul a lot worse off than oneself, isn't there? 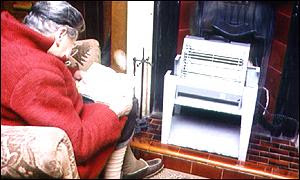 For perhaps as many as 27 million American adults, keeping warm this winter will mean borrowing money and 20 million will use credit cards to be able to afford their heating bills, according to a CreditCards.com poll. 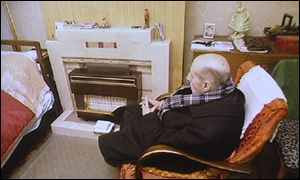 "Almost all the heating oil in this country is consumed in the Northeast, in New England, the midAtlantic states of New York, New Jersey and Pennsylvania."

Residents of those areas could pay a total of $2,012 over the six winter months -- or an average of $353 a month -- to heat their homes through March 2008. That's a 34 percent increase over the previous winter's bills.

Read the rest of this report.

So, we suppose we poor old Brits should count ourselves lucky, eh?

Just imagine. We could be living in the wealthiest country in the world.

Since what with this sort of stuff, and the expense of health care in the states, we seriously surmise we wouldn't have survived this long.

"Stand and deliver! Your money or your life!?"

Btw, Happy Christmas to one and all.

A good slug of Scotch with hot water and lemon, may help that cold Richard - hope you soon feel better, by the way.

We aren't hit as badly as the poor souls in that article. Here in Oklahoma we're south-ish and west-ish enough to miss the worst freeze-ups and snows. We do get frequent short sharp spells of extreme weather though (heat, cold and turbulence). Our gas bills are more in line with the $500 per winter (max) but in summer the air conditioning is very expensive - so it's swings and roundabouts.

Don't get me started on cost of health care! I'm lucky to be old, and a Brit with two pensions coming from the UK, and sheltered by husband's Medicare entitlement such as it is. To be fully covered we still pay two hefty monthly insurance supplements, and meds are horrendously expensive.

The UK has it much easier - especially for the seniors. Whatever faults the NHS and National Insurance has, they are as naught compared with what goes on here.

What I can't understand is why so many here vote Republican, and why so few get strongly behind the politicians who WOULD assist their plight - e.g. Dennis Kucinich.

Here in central Illinois are power bills for a year (gas for central heating, electric for air conditioning and cooking) work out around $280 per month! Last year the power bill rose overnight by 45%. There is an energy monopoly here, so no competition. Oh, and no currency exchange: many Brits make the mistake of converting to British pounds, but we get paid in dollars, so our power bills are the equivalent of 280 pounds a month! As for health, I'm fortunate that my wife works for the Social Security, and has a federal insurance scheme that covers me also. Even so, it costs $240 a month, plus co-pays for every doctor visit or prescription.

American Dream? It's an American nightmare.

On the subject of American healthcare: Try this. These sort of reports are coming out of America on a regular basis of late. Profit before people, is the motto for those who run this nation.

Our winter fuel extra gov payment is marvelous [we'd like more of course] - the extra £200 [$400] makes a big difference.

There are some people who fall through the benefits' safety net, but that's (sadly) due mostly to folk who don't (or don't get help with) filing the claims to their rightful entitlements. Now that is something that could be greatly improved - help with the procedures involved in getting what's rightfull theirs.

There ar many millions of unclaimed benefits sitting in the various systems unclaimed. Every year that unclaimed pot of money grows.

Is anyone else experiencing problems with google mail?

"...filing the claims to their rightful entitlements. Now that is something that could be greatly improved - help with the procedures involved in getting what's rightfully theirs."

I'm not sure I understand this. What did they do to become "entitled?" Why is it "rightfully" theirs?

Seems prettynobvious that you're not British, anon. Otherwise you'd know all about our NHS/DSS/WPS/DHSS contributions into those government/state systems - ie: we cut out the fat cat, profiteering middleman

We pay in - so when the time comes - we get what we're entitled to claim - by right. Not complicate really. You're entitled to get what you've pre-paid for aren't you? That's your right isn't it? Even if it's fishing tackle from a sports shop we're talking about, and not just state administered health insurance and pension schemes.

Check it out for yourself. There's no shortage of official UK websites that explain everything in minute detail, if you're really looking for enlightenment -- and not just an argument.