Blogroll Me! How This Old Brit Sees It ...: Message to Michael Martin, Speaker of the House of Commons : You've had a good run. Now, Resign!

Message to Michael Martin, Speaker of the House of Commons : You've had a good run. Now, Resign! 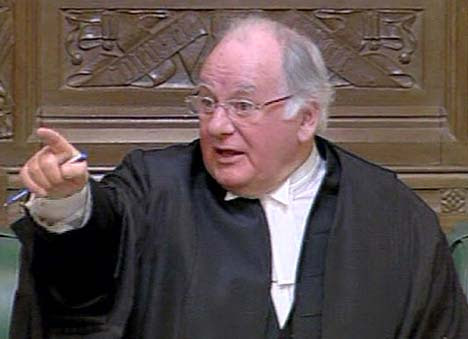 Our message today to the now completely discredited Mr Michael Martin, Speaker of the House of Commons, is short, sweet and straight to the point.

As an alleged man of "honour" you should set a good example. Moreover, you should be seen by all & sundry, to set such an example.

So, for God's sake man, why won't you simply sod off? Why won't you just get up and, in words of a single simple syllable, GO! And when we say GO, we mean go NOW!

Here's what the BBC's political editor Nick Robinson has to say on this sorry score, in his own (extremely), excellent blog. [See also what some of Robinson's readers/commenters are saying.]

"Honourable" politicians are almost extinct these days, Richard. [If there ever really were any.]

Christ, Richard. Did you hear him? When pressed about resigning, etc, he had the bare faced cheek to say (praphrased) any talk about his job, was for another day!!!!!

NEWS befor it hits the news!!

One of my usually reliable Scottish contacts tells me Martin's going to "STAND DOWN".

" Michael Martin has told MPs he intends to stand down, so becoming the first Commons Speaker to be effectively forced out of office for 300 years.

In a brief statement to a packed House of Commons he said he would step down on 21 June, with his successor set to be elected by MPs the next day.

Mr Martin, who will also step down as an MP, "More here.

How someone so inept has managed to stay as Speaker for so long can only be a result of "friends in high places". I've seen him twice recently on tv and on both occasions he was reading a prepared statement. He had difficulty reading, so how can he be a Speaker?
It seems the game is finally up.