Blogroll Me! How This Old Brit Sees It ...: Make A New Year Resolution To Stop Force Feeding Kids To Death With Fast/Fat/Junk Food ...

Apart from their (constantly & callously lobbied for), perpetual pandering to filthy fat-cat, fast food, close to criminal profiteering of course -- entirely regardless of the fast becoming, fatally catastrophic cost to our kids. 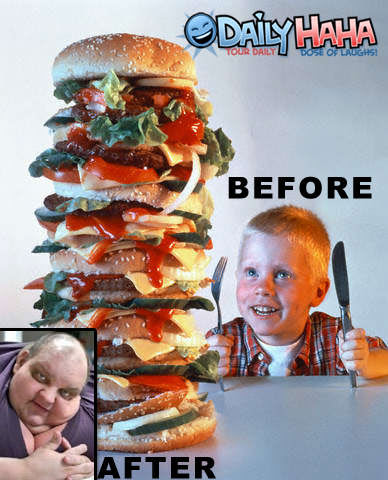 A ban on adverts for junk food during television programmes aimed at children under 16 has come into force.

Regulator Ofcom has outlawed adverts for foods high in fat, salt and sugar in an effort to tackle rising childhood obesity levels.

But broadcasters say the quality of children's programmes will be hit by the loss of an estimated £39m in advertising revenue.

The move is the latest stage in a phased crackdown on advertising during programmes aimed at or appealing to children.

In April 2007, junk food ads were banned during programmes made to appeal to seven to nine-year-olds.

And by December this year, dedicated children's channels will have to phase them out altogether.

Children's Secretary Ed Balls has said that UK children see some 10,000 television adverts a year and recognise 400 brands by the age of 10.

And surprise, surprise, there's even more (isn't there always?) where that came from.

Y'know, some (such as ourselves), see this sort of inexcusable serial-stuffing-fest, as nothing short of child abuse.

Increasingly, some of our children are slowly being force fed to death -- entirely as a result of a no holds barred, never ending battle (waged by all the usual suspects), to grab as big a slice as possible, of the already obviously obscene, junk food market mega-profits.

The bottom line, as appallingly unpalatable as it may first appear, is that these conscienceless crooks are now literally 'farming' us and our children, exactly as the animals we eat are farmed.

We are all now being 'farmed' - as perpetually profit producing, cattle-like, obsessive compulsive consumers. No more and no less.

Meanwhile, millions of our fellow human beings, both young and old, are needlessly suffering and starving (worldwide), on a damned daily basis.

Anyway, have a nice day. (With great massive dollops of extras on the side).

In America there is a grass roots movement fighting for the right to be obese and to have obesity and excess fat regarded as beautiful and healthy. Incredibly they use slogans like "health at any size" and "health at every size."

They believe the BMI is unreasonable and a government plot.

I've been going head to head with some of these morons in a comment thread. They've called me a 'weight nazi' and suggest that people who believe in the BMI and agree with the CDC and medical doctors are hateful nazis whose aim is to "disappear" fat people. I'm not kidding.

Most of the whiners are women who claim to be feminists supporting a new image of women...which is just BS. America is one crazy ass place.

Self inflicted obesity, along with smoking and boozing related medical conditions are between them the biggest[by far] drains on our National Health Service.

They waste cash, time and effort and take up beds that should more easily and swiftly be available to unavoidable 'acute' sufferers from other [unavoidable] illnesses and serious accidents.

That's why I agree with some of ideas now being talked about by Gordon Brown regarding the 'reponsibilties' that [should rightly] go hand in hand with the 'benefits' of our free at point of need national health care scheme.

Richard, Moonrattled and Pimpernel ... I know exactly where you're coming from.

I think we're all far too accomodating=patient=dishonest by listening to all the various lame cop-out talk from some stupid people who lack any self discipline at all - and NOT calling them on it.

You better look into your schools' food offerings not just the public advertisements. Here in the US a major source of public school income in a lot of places are vending machines for soda pop, candy, and just these kinds of fast foods aimed directly at the children in school. That happens even when there is a school lunch program, which itself often features just this kind of fast food. Pepsi and Coke and other carbonated drink and candy vendors have a captive audience and share their income with the school budget, often at higher rates than they give to other establishments that get their vending machines.

While there are certainly individuals who gain weight very easily on any diet, epidemic obesity is being vended for profit, here in the US right where the most vulnerable age groups are captive audiences.

I wouldn't be so harsh on these unfortunates,food addiction is a chronic disease, triggered by sugar (corn fructose, a deadly drug and just about in every processed food) and wheat. We need to wean children away from these deadly products and who knows what aspartame does to our systems, I can't touch it as it sets me in incredible cravings.
Maybe certain so-called "food" items should be banned.
I also like the juxtapostioning of the Iraqi children dying of starvation and the overfed children of the USA/UK.
XO
WWW

I know there are always some exceptions, but apart from those with glandular and-or other genuine medical complaints I'm afraid I have ver little sympathy with fatties.

It's not like you wake up one morning and shriek "Argh! I've got fat." Neither do you catch 'fat' like you catch a cold or a disease. You've got to work on it. And keep working on it.

Sure, sticking to a sensible diet and suitable physical excercise habit is a pain in the ass for some, but like another old maxim goes - there's no gain without some pain. (And I don't mean weight gain. But I'm sure everyone already knows that).

Dutch, you're right about the important part schools play in either helping or hindering childrens' healthy eating habits. Thankfully, a start has already been made on introducing a better way to eat here in UK schools.

Old Brit, thanks for highliting this silent-killer problem faced by our youngsters on an almost hourly basis.

I am a vegetarian so kids are off the menu.
Highland Free Press
http://www.weddingscot.info/

Scotland is under attack.
PLEASE See website for information

I've been shocked at how commonplace diabetes is in the USA, even among young children - I feel sure that the type of diet you're discussing is a big factor in this.

From an article in USA Today (Health section)

"We are seeing here 7-year-olds, 8-year-olds with pure type 2 diabetes. They're very obese, and within five years, we're seeing kidney complications, we're treating 10-year-olds for hypertension, high lipids and having to see how (the drugs to treat those conditions) interact with diabetes."

Lynch predicts that by the late teens, many children with type 2 diabetes will be facing health problems that a generation ago didn't occur until midlife.

"We have children with declining (kidney) function who are 17," she says. "We've had kids on multiple drugs for high blood pressure who are 18. We find ourselves using a lot of adult medications," and studies have not been done to assure their safe use in children. "This has been a huge, scary learning curve for us in this study. We keep venturing further and further out on that limb."


Of course, here in the US with no National Health Service the health care industry thrives on all this.
I often remember a remark I heard from Bill Marer on TV soon after I arrived here (as near as I can recall actual words)-

They feed on each other.

It is, indeed a crazy ass place, Moon Rattled!

The BBC presented the latest report as though the UK had overtaken the US in obesity problems. In fact, America is still well ahead, though the UK is fast catching up. In America, freedom to eat is as sacrosanct as the freedom to own a gun. Like Twilight, I have been shocked, both by the incidence of diabetes and the sheer numbers of grossly obese Americans one sees. Recent news reports in the US have highlighted the problem again, but film from a hospital showing obese children being treated for diabetes, unintentionally revealed that the nursing staff were themselves even more obese!

OMG, so it really IS a cookbook (to serve man)? Tuesday is Soylent Green day. I'm always out of step, everyone is getting so big, just when I'm shrinking (grin).

Seen the latest yet?

Experts have said that every year around 70,000 people needlessly 'eat themselves' into early graves.

this is mental. the problem is that fat people have been normalised. im not saying they should be stigmatised (as it leads to all sorts of badness) but there is so much crap about fatism it makes me feel abnormal. im slim thanks to a good diet and plenty of exercise...which is my normalised. these people need to get moving. my friend pus it very well. move more, eat less.