Blogroll Me! How This Old Brit Sees It ...: The World Tribunal on Iraq ...

The World Tribunal on Iraq ... 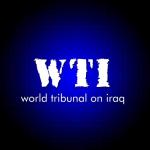 Hello again. This Old Brit's missed you. Really. I hope the feeling's mutual.

Like the old song says, it is so nice to go traveling but so much nicer to come home.

So, let's all get back to business; let's talk Turkey. Indeed, that's exactly where I've been for the last couple of weeks. In Asia Minor, that place of biblical renown where East meets West.

Ever heard about the World Tribunal on Iraq? If you rely on mainstream media for your information, I very much doubt it. ( Particularly if you live in fortress America.) So, let's see if we can try to somewhat change that.

Between 23rd & 27 th June the World Tribunal on Iraq took place in the city of Istanbul, Turkey. Amongst the numerous attendees was a lovely lady that you may well have heard of before - Arundathi Roy; she was the 'chair' of the Jury of Conscience.

Here's a brief idea of what it was all about.

With a Jury of Conscience from 10 different countries hearing the testimonies of 54 members of the Panel of Advocates who came from across the world, including Iraq, the United States and the United Kingdom, this global civil initiative came to an end with a press conference at the Hotel Armada where the chair of the Jury of Conscience, Arundathi Roy, announced the Jury's conclusions.

And here's an example of some of things they had to say.

Here's another 'teaser' to whet your appetite for more.

The session in Istanbul was the culminating session of commissions of inquiry and hearings held around the world over the past two years. Sessions on different topics related to the war on Iraq were held in London, Mumbai, Copenhagen, Brussels, New York, Japan, Stockholm, South Korea, Rome, Frankfurt, Geneva, Lisbon and Spain.

To find out much more about the World Tribunal, follow the link provide at the end. And, be sure to make your way all around the Tribunal's site. I'm certain it will be worth your while.

Unless, of course, you're one of the ignorant, kick-ass, uncivilized, ill educated Neanderthalls who couldn't give a flying shit about what happens to innocent people. Unless they're your own colour/race/nationality/ religion, of course. (Sarcasm ends.)

Here's a final excerpt from where I'm recommending you visit. When you get there, please read, learn and inwardly digest. Then, as usual, please help spread the truth by passing on The Old Brit's blog link.

They have compiled a definitive historical record of evidence on the illegality of the invasion and occupation that will be recorded in a forthcoming book.

I'm surprised nobody's commented yet on the historic World Tribunal in Istanbul. Perhaps they are still exploring that website or perhaps they don't know you are back.

Keep up the commentary. We all need it.

Thanks Rosemary, it's nice to see you back, too.

As for any comments [or none] only time will tell I suppose.

Hope your holiday was grand.

Thanks for the info.

The 86 year-old Paul Harvey, who is a US radio commentator and has been for 50 years, I suppose, thinks Bush should have used nukes against Afghanistan. ABC, which carries his program, just renewed his contract for $100 million.

Think they'll be reporting on this?

It was great, CR.

As for the geriatric radio nut you mention, well, words fail me.

Talk about being old enough to have more sense, eh?

As for the obscene amount he's being paid to spew his hatefull nonesense - look on the bright side - you can guarantee his ill gotten gains will outlive him.

Nasty comment I know, but I have nothing but contept for any of his twisted ilk.