Blogroll Me! How This Old Brit Sees It ...: Israeli persecution of Christians/Muslims/Gentiles/etc, continues 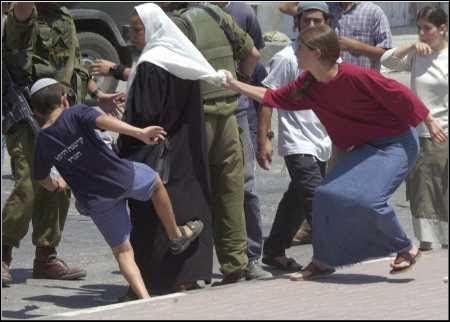 In spite, that is, of many (including ourselves), having been well aware of such shameful serial persecution of any and all those deemed Gentiles, for a long, long time. Of course the very idea of anyone daring to make any kind of accusations concerning clear cut anti-Gentile acts is seen by some as totally taboo.

Well, we aren't just "anyone". We're here today to state quite publicly that we still possess some spine.

And, were glad to say, so does our good friend Gordo over at 'appletree'.

Hence, a huge hat-tip to him for the following:

Christians in Jerusalem want Jews to stop spitting on them

Click straight across to Haaretz to read the rest of this recent, internal Israeli press report relating to the sort of shocking stuff we're shouting about.

And once you've read it, if you're still set on somehow seeking to defend the damned indefensible, then please do so elsewhere. Since there are already more than enough blogs, web sites, etc, spread across the internet that are still prepared to swallow and/or to publish such shit.

But we're not one of them.

I'm one of those to whom this comes as no surprise I'm afraid. It's scandalous the way our media inevitably turns a blind eye to all this.

The girl pulling the older woman's scarf looks like an American Jewish girl living in Israel, the land that "God gave to the Jews." How an American can claim this land is best left up to the End TImers and the Zion Christian crowd.

Here in the "Land of the Free," to use Gore Vidal's dismissal of old national myths, Gentile Americans are and should be sick unto death of the subtle and not-so subtle pressure and blackmail the American Zionists crowd applies to any free thinker who questioned the truism of "Jewish nation good, Arabs, bad!" scenario.
All lord and masters would never allow a picture like this to be published. I have given up on American newspapers-it is mostly government propaganda and filler. Keep up the good work.