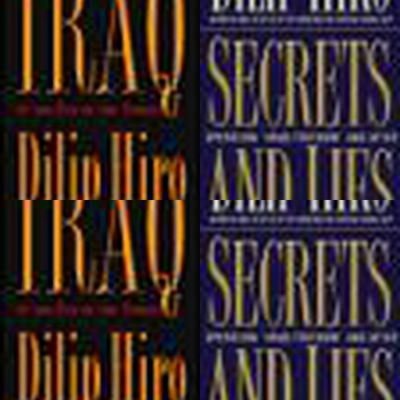 Here's some more powder to keep nice and dry. I suggest you store it somewhere safe. Filed right alongside those Downing Street Memos should be as good a place as any.

Roy Greenslade is professor of journalism at London's City University, and in today's Guardian he 'salutes' author Dilip Hiro's fine work - "Secrets and Lies: The True Story of the Iraq War". It's a depressing yet magisterial assessment of the reasoning that led to the Iraq invasion and war.

This Old Brit salutes Mr Hiro, too. He's a man who not only knows what he's writing about - but also who he's writing about. What's more, he's one of that rare breed of writers not afraid to come right out and name names.

For example, just take a look at this little lot:

It goes without saying, of course, that Bush, Blair, Rumsfeld and Saddam also get more than a mere mention. Likewise, Colin Powell. Indeed, Greenslade writes thus:

All the political lies, distortions and obfuscations of both the US and UK to help themselves more easily launch their illegal Iraq invasion, are coolly dismantled in the most meticulous manner imaginable.

That he does the job so meticulously - even, arguably, in too detailed a fashion on occasion - makes his overall indictment even more powerful than the scatter-gun approach of other war critics, such as Michael Moore.

And take a look at this.

... he holds up every piece of fake intelligence to scrutiny, revealing both its falsity and the propaganda use to which it was put. Every excuse advanced by Bush and Blair for the invasion is shown to be hollow, as they seek to conceal the main reason for their pre-emptive strike: the desire for regime change. In some of the most telling passages, Hiro reveals the key roles played by the sinister group who surrounded Bush ...

Then, squirm in disgust as you read:

... the Pentagon strenuously denied that it had used napalm in Iraq, despite an Australian correspondent witnessing its use. That wasn't napalm, said a spokesman, it was a Mark 77 firebomb. As Hiro observes this statement was "cynical sophistry", since the Mark 77 is a mixture of kerosene and polystyrene, while napalm is a mixture of jet fuel and polystyrene. The result is just the same ...

And for today's final teaser.

But the haunting moments come, just as they did in the revelations about the reality of the Vietnam war, when one discovers that neither politicians nor military leaders ever tell the truth.

It is not only sad and evil that they lied to us but shows what utter contempt for democracy and the electorate they have.

When I and my comrades were busily bombing the populated areas of North Vietnam in the 60s, thinking we were, somehow or another, defending them from evil dictators come to enslave them, we were told that these operations were very secret, not from the people who were being bombed of course... from "the folks back home; because they wouldn't understand".

They said this sort of thing with the same self assured smugness of Bush, Rummey or Jerry Falwell and for all their bellicose war mongering they were really lousey warriors.

This comment has been removed by a blog administrator.

The majority of those responsible [then and know] weren't really 'warriors' of any kind, were they, Noel?

Cowardly rabble rousers - I spit on them all.

There are three types in the US that support the war:
1.) those who haven't bothered to learn a thing about the middle east since 9/11, its history or why, besides their presumed "jealousy" and hatred of "freedom", people living there might not like the US too much:
2.) those who see the war as politically expedient for their own ends, e.g. the Zionists and Rapture crazies;
3.) true believers and capitalists who honestly believe that we cannot lose any other way than militarily, so we've gotta stick it out.

What must it be like to be as deluded or fake as the BushCo team (with special guest star, Tony Blair)?

It's the category 2 types that are the most numerous and the most scary Cosmic...