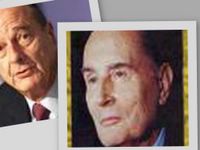 So the crazy old French cockerel still can't resist cackling at his own corny jokes, eh?

This week, the French president, Jacques Chirac has been taking another swipe at we Brits and our food. According to Jacques the lad, all the British ever serve is old warmed-up stews and similar stuff. Well, that's rich. He should merely take a look in a mirror if he want's see some really, old warmed-up stuff.

It seems to me that this mean old man's timing is as tasteless as his humour. During this week, of all weeks, he should have buttoned his lip and kept a very low profile. For it was this self same week, 20 years ago that another excrutiating excuse for a French president did the dirty on others. And I do mean dirty.

Felling of a Warrior.

Twenty years ago this week Rainbow Warrior was sunk by French agents in Auckland harbour. Paul Brown, who had sailed with the Greenpeace flagship just days earlier, recalls the worldwide shock at a callous act of state-sponsored terrorism - and asks why so many questions remain unanswered.

Does that toll any bells for thee, mon cher ami?

The 11 crew had taken on Greenpeace's most ambitious campaign in its history, moving a contaminated people to a safe haven. The Americans, whose 1956 Bravo bomb had covered the people of Rongelap island in radiation, had removed all the population's thyroid glands to prevent cancer killing them and were using them as guinea pigs to see what further effect continued radiation had on their health.

An increasing proportion of children were being born deformed. The island's elders appealed to Greenpeace for help, and I had signed on as a deckhand for a month to report the evacuation for the Guardian.

Or perhaps this little snippet?

In the shock of the news of the sinking all these memories and thoughts swirled through my mind. My job was to write the story, the facts as known, but there were not too many of those. This was July 11 1985, before mobile phones. New Zealand was still a long way away. In Auckland it was the middle of the night and every telephone line to Greenpeace's New Zealand office was jammed.

Or, maybe this one does.

By September 22 the game was up. Prime Minister Laurent Fabius admitted that the French secret service had ordered the attack on the Rainbow Warrior and the French defence minister Charles Hernu, a close ally and friend of Mitterrand, resigned, accepting responsibility and saying the president was not involved. We know now that this was not the full truth either: a recent confession by the former head of the Secret Service claims that Mitterand did, in fact, sanction the attack after all.

Well, whether your name is Jacques or not, dear reader, you should certainly see the rest of the article I'm quoting from here. It was published today, in the Guardian. For the whole sordid story, simply click at the end of this piece.

Oh, but wait. Don't do anything just yet. I almost forgot to pass on some important advice I have for Jacques, regarding how best to avoid in the future, having his super-sensitive stomach turned.

Simply refuse to eat any of our awful, Brit food.

Shit and snails. I never imagined I would be defending British food but this is for a good cause. I've changed my mind and think we should change the name of french fries after all. Maybe to something more American like "torture fries", "police state fries" or "genocide fries".

The bombing of the Rainbow warrior disgusted me as did the bombing of Daryl Cherney and Judy Barrie here in Humboldt county. I never cared for the methods of either of these otherwise important environmental groups or the personality of Cherney and Barrie, who has since died of cancer which is probably a complication derived from the bomb injuries. But bombing them makes me want to vomit and go take a shower.

Chirac is starting to remiond me of someone - "thick", thoughtless, inappropriate -

Didn't Ronnie Raygun's government smile on the Sinking of the Greenpeace Ship? Ah, morning in America. That being the baseline, what we're enduring now definitely is the twilight.

As to Frog Fries, what about the humble chip? Recall the scene in "A Fish Called Wanda". There used to be fish and chip places in the US. We had one in the small town where I grew up. 'Was the only "fast" food place we patronized. I shall scout about Chicago for a vendor and report back.

Noel, And to think these are the kind of people we're supposed to respect. Huh. They're they very types that 'invented' terrorism. Of course, if it's state/government sponsored it don't really count, eh?

The victims and their surving loved ones finnshi up the same way they would have, if it was OSB himself that had done it.

I'll line up behind you at the vomit pan and then the shower.

Cosmic, I belive you' right about when evrything first started to 'rot'. Raygun and Mad Maggie Thatcher - what a double act they were. They really set things rolling steeply downhill, with their anything goes so long as there's big bucks to be made.

Things have been going downhill, ever since - and still are.

BTW, remember to get lashings of salt & vinegar on the fish & chips - that's the Brit way. Heh.

I've never had a lot of liking for the Frogs to begin with. Dealing with them during the war was a REAL hemorrhoid. I thought that since they had had their butts kicked out at Diem Bien Foo (spelling????) and supposedly were out of the war that their involvement there would be token at best. The Frogs don't do token it seems. They interfere in EVERYTHING ad do their level best to made sure to be in the way and under foot just as much as possible! And they never, NEVER have anything constructive to add to the issue. And then I married one and that sealed my belief that there is NOTHING lower and more useless than Frog! GRRRRRRRRR!

All states use terror. This is why the war on terror which devolved into the American/Anglo empires attacking civilians and killing many of them, is ridiculous.

State sponsored crimes, assassinations, bank problems, industrial destruction, loans that can't be repaid, etc all cause great suffering. This is OK, of course, if you are a state. If you are stateless, then you must play fair.

Ha! Juliedee, It seems like you're as big a fan of the French as I am, albeit for different reasons.

Moi? A "fan" of le Frog? Ya know what the best thing to do with France would be? Hit it with a blanket of neutron bombs and when the whole thing cools off make it into a new homeland for what ever people are the refugee du jour!

Whoa, steady on , Julie. That's a bit drastic, What about the fall out? Heh.

France is only 22 miles away from England across [the narrowest point of] the Channel. ;^)