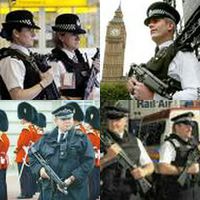 The day after the second London underground attack within two weeks, things took another turn. Whether this turn will lead us all down a better or worse road, remains yet to be seen.

What happened today in a crowded tube train carriage at Stockwell station, deep beneath the capitol's streets, was a UK way-of-life watershed. For the first time in our history it seems ominously apparent that the order of the day for Britain's 21st century armed police, is now, "Shoot to kill!"

Here's a partial account of what some shocked, London tube commuters witnessed first hand and close up, this morning.

"One of them was carrying a black handgun - it looked like an automatic - they pushed him to the floor, bundled on top of him and unloaded five shots into him," he said.

Well, that's what one eye witness today told the BBC.

And this is [ some of ] what Scotland Yard had to say.

... the man shot dead at about 1000 BST on Friday in Stockwell had still to be formally identified.

He was under police observation because he had emerged from a house that was being watched following Thursday's attacks ...

Then the London Metropolitan Police Force supremo, also stepped up to speak.

Next, the words of one BBC correspondent.

BBC Home affairs correspondent Margaret Gilmore said officers had challenged a known suspect they had been following. "He ran, they followed him. They say they gave him a warning, they then shot him."

Police had warned they would shoot to kill if they believed somebody to be a threat ...

Then we read this.

The Muslim Council of Britain said Muslims were concerned about a possible "shoot to kill" policy.

Spokesman Inayat Bunglawala said: "There may well be reasons why the police felt it necessary to unload five shots into the man and shoot him dead, but they need to make those reasons clear.

"It's vital the police give a statement about what occurred and explain why the man was shot dead."

So you may well understand why today, This Old Brit, to coin a phrase, 'reserves the right to remain silent' - for a while at any rate. Because it's his firm belief that there's much, much more to all of this than [ so far ] meets the eye. As and when he does learn more, you can be certain you'll be amongst the first to know.

In the meantime, the bulk of the [currently available] relevant information can be found at theBBC link below - and via various other links therein.

Thank goodness we have a statement from an observer at the scene. (Let's hope he really IS a disinterested observer and not a person with an agenda). We need more observers to come forward.

When I heard about this "tube bombing that did not explode" late yesterday followed by the news of the late evening vote in our Congress passing the "permanent" renewal of our infamous Patriot Act, suspicious thoughts overwhelmed me. HOW CONVENIENT. I wonder how many votes on our side were lost because of that late London news?

Now I am learning from you that there just may be more to be suspicious about.

An extra tid-bit from 'The Independent' [tomorrow morning's edition - Saturday].

Sheesh! They sure wanted this fellow DEAD. Talk about overkill.

** The man, whose identity has not been released and who was not believed to be armed or carrying a bomb, was shot five times in the head on the floor of an Underground train.

If they acted in a reasonable manner it seems to be there would be plenty of surveilance tape to show on the T.V.

Like the police here they shoot first because they have given up the pretense of knowing what they are doing and are fearful because the majority of the population see them as the greatest threat rather than protection.

I am taking more photos again from my window and yard and will be putting them on the web soon, hopefully, showing how they are almost exclusively dress code cops, the style police with automatic weapons. Real crime goes almost totally unchecked here and criminals run Humboldt county where I am. Drug production is the path to power here and if you have ever heard of Humboldt county, California it is almost certain to be in connection with pot or other drugs mainly meth.

There is nothing new on my local page but this is the first place I will probably post it. It's Friday night so the pickins' should be good.

MOre detailed witness report. From the [early am] Saturday edition of The Gaurdian.


* A witness to the incident at Stockwell described the man being "shot dead" in front of him as an officer "unloaded five shots" from a pistol. Another witness said he heard three shots.

Passenger Mark Whitby said he was sat on a Northern line train when three plain clothes officers ran on in "hot pursuit" of an Asian man.

He told BBC News: "I heard lots of shouts of 'get down, get down'. I looked to my right and I saw an Asian man run on the train. As he ran on he half tripped."

He said the man was being pursued by three plain clothes officers, who ran on just a few feet behind him.

The witness said one officer brought out a pistol in his left hand and "unloaded five shots into him". He said the shooting happened "five yards" away from him.

Asked what condition the man was in, Mr Whitby said: "He's dead ... I've just seen a man shot dead; I was distraught."

Terrible story, Richard. I hate to hear something like that about England, where you don't expect it. The cancer is spreading.

The Ambulance was called BEFORE the guy was shot?! Eh???

*** Alistair Drummond, of the London Ambulance Service, said paramedics had been called to the station at 10.10am (0910 GMT).

"There were at least 20 of them (officers) and they were carrying big black guns," said Chris Wells, 28.

"The next thing I saw was this guy jump over the barriers and the police officers were chasing after him and everyone was just shouting 'get out, get out!'"

Hold on ...... not clear if witness, Chris Wells was also an ambulance paramedic.

Gawd, got to go now, it's very late here.

Noel, thanks for that. Will 'see' tomorrow.

Right, Harper. It IS spreading.

Really got to get to bed now. 'See' you and all again tomorrow. G'night.

I knew the shooting explination was fake.

If the guy had a bomb, this would have been the headlines.

But it wasn't nor did any "bomb being examined" stuff come later so I knew it was literal overkill. And this is what it becomes: deadly force vs deadly force with all sorts of people in the middle.

Richard, dear, I hope you finally got to bed. You put in a very long day!

Because it's his firm belief that there's much, much more to all of this than [ so far ] meets the eye.

Oh, you bet there is.

there is a uk police shoot to kill policy

this was published one week ago

London : Police are preparing specific shoot-to-kill orders to combat suicide bombers.
Marksmen will be told to aim for the head rather than the body.

but the news has been 'blacked out'


A New Zealander working for Reuters in London says two colleagues witnessed the unconfirmed shooting by police of two apparent suicide bombers outside the HSBC tower at Canary Wharf in London.

The New Zealander, who did not want to be named, said the killing of the two men wearing bombs happened at 10.30am on Thursday (London time).

Following the shooting, the 8000 workers in the 44-storey tower were told to stay away from windows and remain in the building for at least six hours, the New Zealand man said.

He was not prepared to give the names of his two English colleagues, who he said witnessed the shooting from a building across the road from the tower.

Reports of attacks carried out by suicide bombers have been rife in London.

Canada's Globe and Mail newspaper reported an unconfirmed incident of police shooting a bomber outside the HSBC tower.

This comment has been removed by a blog administrator.

A man shot dead by police hunting the bombers behind Thursday's London attacks was unconnected to the incidents, police have confirmed.

A Scotland Yard statement said the shooting was a "tragedy" which was regretted by the Metropolitan Police.

Surely, Blair must go. He is NOT in control of this country.
Anyone who chooses to can now just do as they see fit ..... ANYONE!!!!

"So sorry, sorry, what is a few deaths between friends..."

Yes, I said yesterday, if the man had a bomb, the police would trumpet this from one end of the planet to the other. The fact that they were silent spoke volumes.

We are all in danger thanks to this war. We destroyed the liberal Muslims by betraying them at every turn, undermining them if they were socialist, murdering them, intimidating them.

And now we wonder why there are so many fundies now, fighting us!

Did you see my Blair/Bush backstabbing cartoon? You can rip it and post it on your own blog, if you want. Do that with any of my Blair cartoons. OK?

UK now has (undeclared) martial law. Like everyone else, the British bobbies have been duped. Like Americans were at the last two elections.

It's now a world government and corporate bosses have insisted the puppets they got installed, rule from the barrel of the gun.

No doubt the UK police, US police, and Aussie police are being used and duped by the higher ups. They are all being fed proven lie after proven lie. I feel for them because they are just pawns like us and the innoscents that will and have died due to the diceptions going on.

Right now I'm geting info overload/overkill from all directions, [not just @ the Old Brit blog] so it's going to take some time to colate it all - particularly as I work entirely alone.

Please, don't let that stop you posting/commenting in the meantime though.

Bluey and Kiwi, thank you very much for those links, and welcome. I hope you'll stay with us - we all need to work together to get everything out as far & wide as possible.

And Cosmic, "Jesus" is an understatment.

I would post my Brit cartoons here for you except the comments section doesn't allow this. Sadly.

why the fuck do they even have guns?

Regarding the Ambulance being called before the man was shot...this is standard practice across the UK. If a police firearms situation is developing or potentially going to occur, Paramedics will be on standby out of sight in case someone is shot. In order to stand a good chance or resuscition.

s0kXvt The best blog you have!